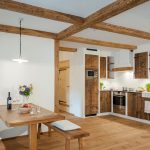 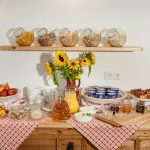 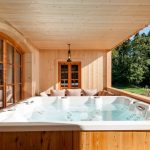 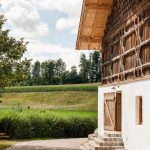 The Chiemgau is somewhat overshadowed by the building activities of King Ludwig II on the Herreninsel. In the process, it was almost forgotten that the art of building has a much longer history in this region. On the one hand, with a view to the “Itakerhöfe”, which were unabashedly called so at the time because the brick facades of the mostly very stately courtyards were given their no less stately appearance by Italian craftsmen. However, the imposing Stadl buildings are at least as convincing. One of the most beautiful, and after the redesign probably the most beautiful of all, is the Stallerhof. With a lot of love for detail and certainly also a good portion of loving passion, the transformation from the former animal dwelling to comfortable holiday flats (swallow’s nest / hayloft / grist mill / beehive / granary / milk room) was undertaken in cooperation with the heritage office. The exterior façade is as splendid as ever. Thanks to well-designed artifice, a lot of light falls into the interior and the luxuriously furnished holiday flats are bright and friendly. The furnishings are rustic in a modern way, without slipping into kitsch, and even the creepy kissy-kissy charm had to find another place to stay – thanks to the owners! There is no proper restaurant. However, you can have breakfast served, there is also a bread roll service and the boss of the house knows how to impress with burgers, pizzas and delicacies from the smoker. The Stallerhof also offers a home for different four-legged staff. In addition to a whirlpool, it is above all the merging natural ponds that make any temperature bearable on the other side of Lake Chiemsee.

hs / translation: DeepL / the photos were provided by: Staller Ferienhof